Co-Editors in Chief Spill Their Tea on the Election 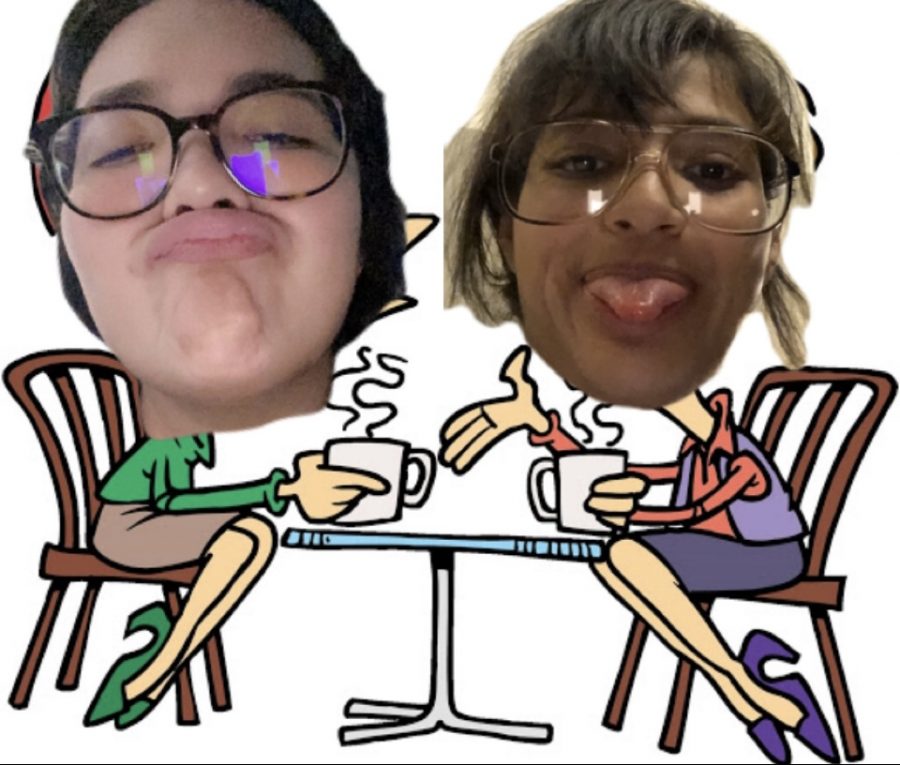 By Gaby Sainz-Medina and Nazareth Perez

GABY: So what do you think of the

NAZ: I’m glad Biden won. Even though I know he’s

not that great, he’s definitely better than Trump.

I want my rights, as a bisexual person, as a woman of color,

I’d like to keep those. And with the way the Supreme Court is

going, I feel a lot more comfortable having a

Democrat in the White House.

GABY: Have you seen those memes of Melania Trump

NAZ: YES! I saw that one earlier today!

GABY: Anyways, what do you think of Biden

choosing Kamala Harris as his VP?

NAZ: Let me be honest with you, I don’t know that much!

About either Biden or Kamala Harris, because a lot of what we

focus on as a generation is Trump and all the stuff he’s done.

And I know there’s probably some shady stuff they’ve both done,

but at this point, when it comes to basic human rights,

I just stick to Biden. It kind of scares me, I am scared!

GABY: I just started looking at the propositions…

NAZ: Oh, in California they just voted ‘no’ on

NAZ: It sucks that we have to wait another four years to

vote in a presidential election. But at least there are

other elections every year. And, did you see that they

gave felons back the right to vote?

of saying ‘yes’ to that one, too, if I could have voted.

I was looking at all the ways it’s leaning right

thing for society possibly, they’re voting ‘no’ on.

okay right now, why change it you know?

NAZ: And also because the main thing right now is the

presidential election, and there didn’t seem to be a lot of

attention on propositions this time around.

GABY: I’m looking at the map of the election,

and the fact that there is seemingly more red states

NAZ: Am I scared that I’m seeing a bunch of red states

GABY: Yeah, but then I think, these are all country states,

with less population, so they have less electoral votes.

NAZ: But we already know that Trump is going to

throw some type of fit since Biden won.

knows where this is going to go. But now that we have more of a

decision that had been made, there’s probably going

to be some riots. There have been a lot of celebrations in

different parts of the country, so that gives me some

kind of hope, but there are still a lot of Trump supporters that

NAZ: Yeah, so one way or another there’s probably

gonna be riots of some kind. So it’s like, that’s scarier,

thinking of the riots and violence.

GABY: I haven’t seen the country so divided

It sounds insane, all the talk going around.

GABY: So overall, what do you think of Biden’s win?

Did he deserve it?

GABY: Yeah, I agree! What do you think of

And I don’t really like how it reflects on our country,

GABY: Yeah, I definitely agree. It just seems a

little bit like a childish situation. But, I guess now

scared for our lives, but our generation is known for

making a mockery of our own suffering.