Nanor Turns Passion into Action: Helping to Rebuild in Armenia After War 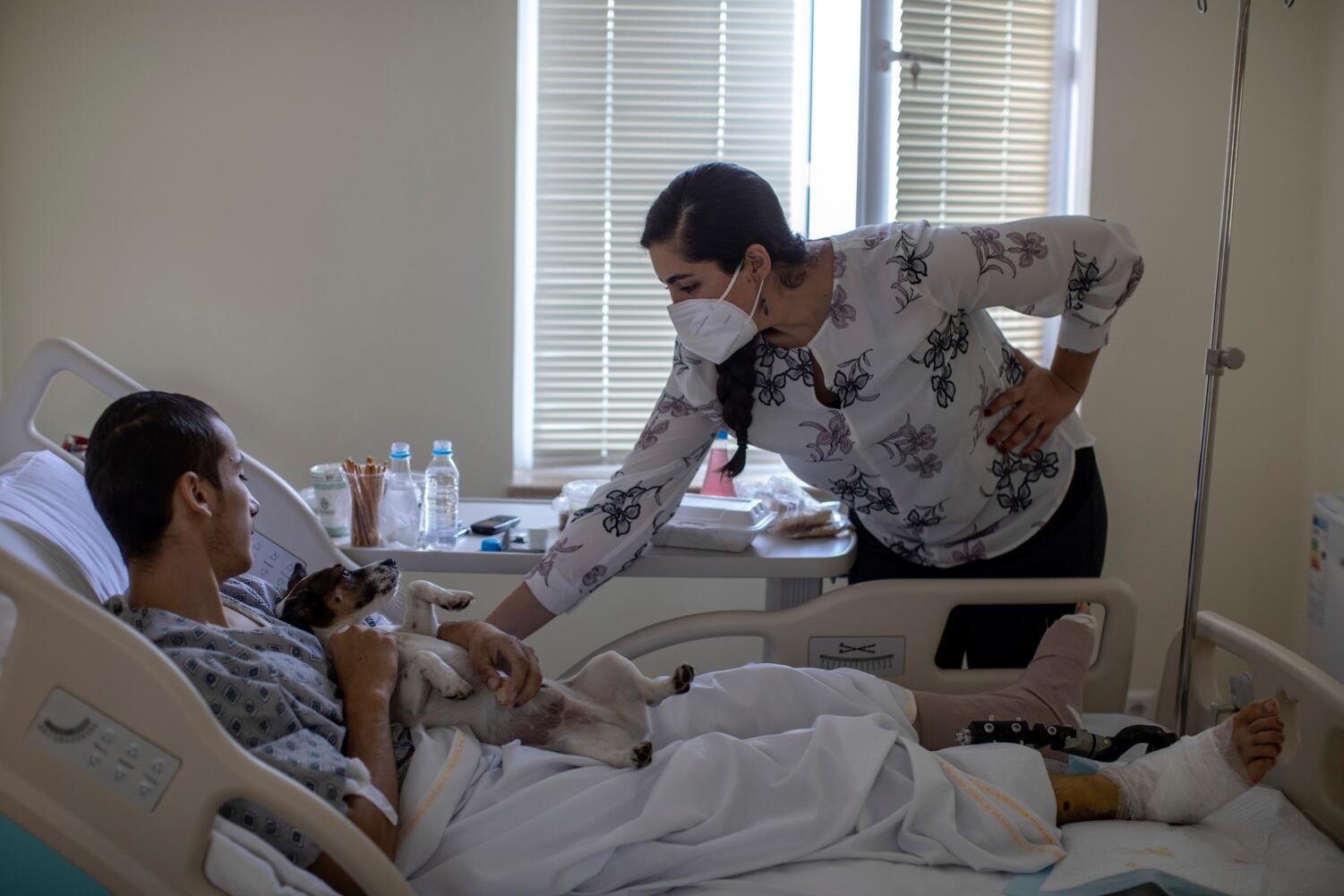 Until a year ago, Nanor Balabanian was teaching World History and World Literature and living in the Eastside dorms as Residential Faculty.  In her classes, she always made a point of teaching about the Armenian genocide of 1915 because she didn’t want genocide to be repeated. Nanor’s great-grandparents had survived that genocide, and Nanor had dedicated her life to helping spread awareness and recognition of the tragedy. About 11 years ago, she also started a non-profit to help students in remote villages in Armenia by providing educational and leadership opportunities, and connected some Eastside students with them via video calls.

Then, Nanor left Eastside, and as of last September, had moved to Armenia. The next day, war broke out between Armenia and its neighbor, Azerbaijan, an escalation of tensions that had continued for the past 30 years.  Nanor found herself in a nation at war, surrounded by fear and coping with a flood of refugees from the battlefront.

“I clearly had heard from God, I needed to go to Armenia,” she recalled in a Zoom conversation in May.  “He was like, ‘I’m going to make way for you, you’re going to go.’”

The war that erupted on Sept. 27, 2020 was a continuation of bitter tensions between Armenia and Azerbaijan, two nations that used to be republics in the Union of Soviet Socialist Republics (USSR) before it split apart in 1991. The conflict is over Nagorno-Karabakh, a region located within the borders of Azerbaijan but populated mostly by Armenians. The Nagorno-Karabakh conflict has its origins in the decision made about 100 years ago by the former Soviet leader 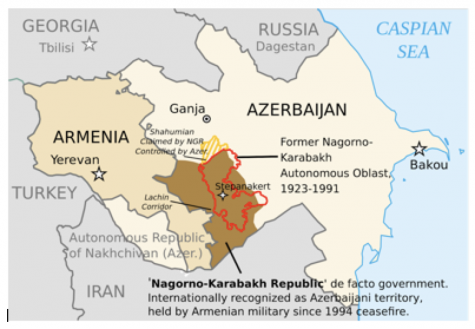 Joseph Stalin to draw a boundary line that left the region as an Armenian enclave within Azerbaijan.

With the breakup of the Soviet Union, tensions between Armenia and Azerbaijan worsened. Some Azeris attacked Armenians who lived in Azerbaijan. The Armenians of Nagorno-Karabakh, backed by their fellow Armenians, revolted against Azeri rule. In the early 1990s, a fierce war broke out in Nagorno-Karabakh, lasting several years and leaving thousands dead. It ended with the Armenians taking control and claiming independence for the region, in close association with Armenia. But the two sides never reached a peace agreement; instead, a cease-fire has prevailed since 1994, despite international efforts to resolve the dispute. 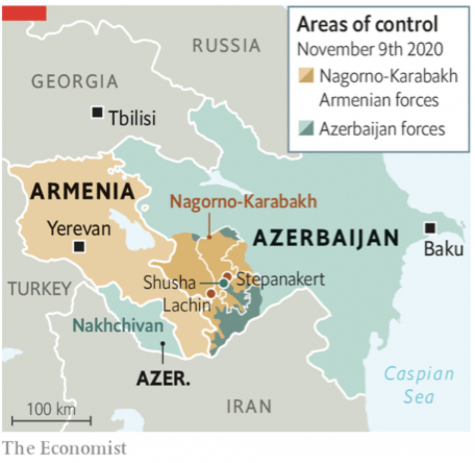 Then, last September, Azerbaijan attacked Nagorno-Karabakh, backed by Turkey, armed with modern weapons from Turkey and Israel, and paid for with the wealth it had accumulated by selling its oil. Using drones and other high-technology weapons, as well as Turkish-supplied paid soldiers from Pakistan and Syria, the Azeri forces overwhelmed the Armenian defenders. Thousands were killed and a large part of the populace was driven out of the region.

A cease-fire was finally established in late December 2020, enforced by Russian peacekeepers. The situation remains highly tense, with many Armenian soldiers and civilians still held as prisoners and a large part of Nagorno-Karabakh now under Azeri control. A large part of the Armenian population of Nagorno-Karabakh have been forced to become refugees, and have fled to Armenia.

“The reason why this is all so painful is because Armenians went through a genocide already, that’s not recognized by most countries,” Nanor said. “Here we were again, being deported … and everyone had to evacuate because they were heavily drone-bombing the entire region.”

Armenia finds itself in very difficult circumstances. After the collapse of the Soviet Union, Armenia fell under siege. Its borders closed and it relied almost entirely on Russia, its former ruler. Turkey, the historical enemy of Armenia, backed Azerbaijan, which is populated by ethnic Turks. While Russia has provided some support to Armenia, it also is careful to cultivate ties with both countries and remained largely neutral during this latest outbreak of fighting. It has now put peacekeeping troops on the ground, but there is no clear path to resolve the underlying issues that drove this conflict.

Armenia depends in part on help from the Armenian diaspora, the people who were dispersed across the globe to places like France and the United States, after the Turkish genocide against its Armenian population in 1915. But Armenia is much poorer than Azerbaijan, which has benefited from the development of large oil fields in the Caspian Sea. Its forces were armed with older Soviet-era weapons and could not match the modern equipment bought by Azerbaijan.

“So, here was Armenia, this tiny nation with no weapons,” Nanor said. “Here is Armenia, it has old Soviet weapons, and here is Azerbaijan, who on itself is very weak, but it has its big brother, Turkey, that supplies Azerbaijan with the hugest drone weapons, the strongest weapons, and goes and buys weapons from Israel.”

Nanor went to Nagorno-Karabakh, which Armenians call Astrakh, shortly before the handover. It was a period of “chaos and uncertainty,” with hundreds of Armenians making pilgrimage to visit local churches, others retrieving historical artifacts, and some clearing out and packing up their houses.

“Villagers went to cut wood and and cut all the trees so they can have firewood and not leave any for the enemy,” Nanor recalled. “Others just packed their homes, windows, doors, literally every scrap of the house, then burned the walls and left. It was horrific.”

As Armenians there got drone-bombed, they fled to Armenia. Nanor became part of the deportation, a 15-hour long evacuation, where they had to try to evacuate by midnight, but she was stuck on the road until 4 a.m. Nanor especially remembers people burning their own houses and schools down as they left, to protect their places from the Azeris, who would soon take over. She said that because the Armenians were leaving their land, they followed a “scorched-earth policy” so there would be nothing left for the enemy to use.

“That was the hardest thing — to see a school burn in front of my eyes — because you know, I’m a teacher, and for me, Armenian schooling is the most important,” Nanor said.

At one point, Nanor ran into a burning school, in tears.

“I ran inside the burning school and saved a textbook,” she said. “I was only able to save two pages, I have those pages and I’m trying to frame it.”

Nanor worked to help the refugees who made their way to Yerevan, the capital. Nanor said that everyone around her hosted a refugee in their homes. When that space ran out, people would rent rooms in big hotels and call the hotel a shelter. Children were living in hotels and ready to start school, and Nanor was put in charge of opening schools for 14 shelters, through the organization Project Hope. She recruited about 100 volunteer teachers.  During the time, Nanor hosted two children in her home and helped take them to school. She said that helped her get through hard times.

“For months, we worked in the shelters, providing education and therapy- lots of art therapy, lots of music therapy,” Nanor said. “We did also teach English, science, and math, but I think most of our aim was to help them psycho-socially, because it was very hard.”

With more than 5,000 deaths and injuries, the hospitals were overflowing. Nanor took to visiting hospitals in the evenings, after realizing that her dog, Coco, could serve as a therapy dog. Nanor brought Coco and also reached out to artists to help the wounded by using painting as therapy and music to bring hope. Since they were in a war, Nanor explained that they didn’t have resources such as trained therapists, so she became a “nurse” and “psychologist”.

“There’s not enough resources for anything, mind you COVID was happening also,” Nanor said. “Everyone did whatever they could. I’m not a counselor or psychologist, but I became one.”

Nanor witnessed a lot of suffering, but she said that the hardest part of her experience was coming to a realization that the people of Armenia can’t count on the support of others, that as a nation, they were on their own and had to focus on nation-building and survival to help themselves. Nanor felt that what she had taught didn’t matter, after seeing that not many stood up when the war broke out.

Although Nanor said we can’t exactly call the 2020 war a genocide, a lot of the language and methods were similar to those used to stir up hate in pursuit of genocide.

“The rhetoric that was being used throughout the war, meaning the language, was all towards exterminations of Armenians, or taking over all the land, or getting Armenians out of here,” Nanor said. “The rhetoric was very much hate-based and intentionally to eliminate the race out of the region.”

Then, on Armenian Genocide Awareness Day on April 24, President Joe Biden became the first U.S. president to recognize the mass killings and deportations of Armenians in 1915 as genocide. Although Nanor had been working for years for this kind of international recognition, after experiencing the war first-hand, it no longer feels like a top priority. She feels grateful for Biden’s boldness and sees it as a step forward but after the lack of global response to the recent war, these days it is hard for Armenia to build hope and trust in other people and governments.

“When everything happened and the U.S. didn’t step up,” Nanor said, “what’s the point of recognizing genocide on paper, if you’re not going to help people who are in it?”

Still, Nanor took hope and meaning from students who reached out to check on her. Seeing students make an effort to catch up on current events in Armenia also helped her feel like she did a good job as a teacher, because it showed they were paying attention to what was going on, making connections, and using social media through reposting posts that covered the events. Nanor believes that any step against forgetting and ignoring is a form of activism because it helps keep events like these alive and recognized.

“As a student, you can’t really do much, you can’t change world powers’ opinions, but by sharing and being active in social media or in real protests, then you’re becoming part of a movement of not being silent,” Nanor said. “Sometimes that’s all you can do, and it’s a step to not forgetting those who are suffering.”