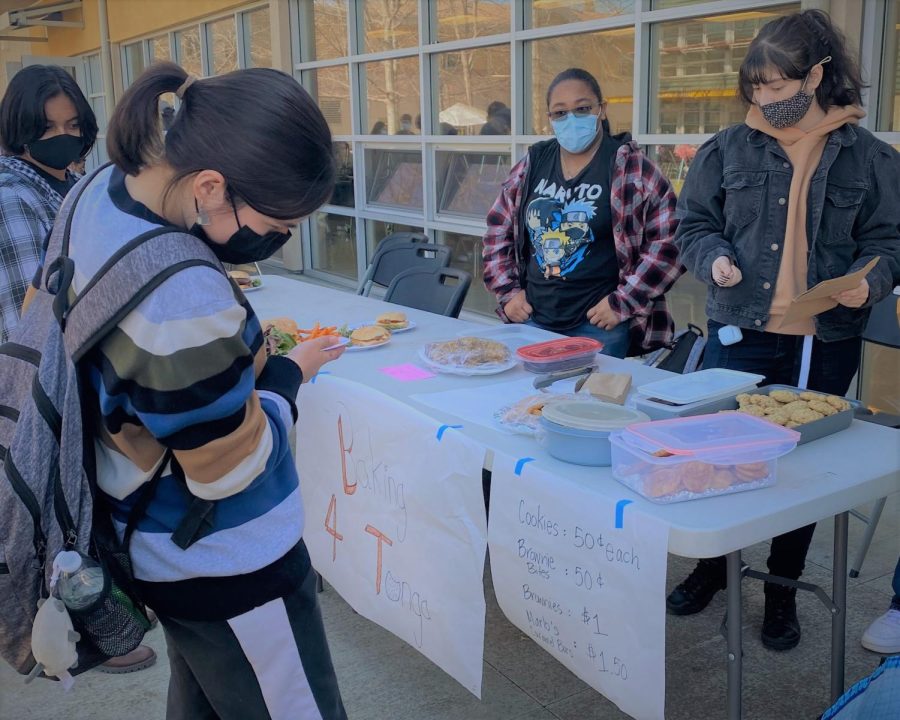 Students sold cookies and brownies to raise funds for Tonga after devastating volcano.

More than a dozen students and staff waited in line near the cafeteria on Feb. 11, full of excited anticipation to buy 50-cent cookies and brownies offered in a fundraiser for the Pacific island of Tonga. Freshman Fehi Piutau organized the bake sale fundraiser to help raise money for relief efforts after an underwater volcano and tsunami devastated the island in January.

The smell of the baked goods wafted through the line and smiles filled the faces of people as they paid. The fundraiser earned $130, which will be given to a GoFundMe site that was organized by Anamatangi Polynesian Voices to help Tonga.

As many as six percent of students on campus are from the Pacific Islands, and many still have relatives living in Tonga. So when the underwater volcano erupted on Jan. 14, families immediately tried to reach out to help. But getting in contact with family members in Tonga has been difficult as phone lines were damaged.

“I have around three family members that I’m close to that live there, and I was only able to contact one of them,” Fehi said. “I have trouble contacting them already because they’re overseas, you can imagine how much harder it is now.”

The aftereffects of the eruption caused a tsunami to ripple through the water, affecting nearby islands, however Tonga took most of the hit. Large areas of the lush green landscape were covered in ash. Access to clean drinking water became the main priority.

“It just happened to affect them the most,” teacher Craig Young said, “It’s scary, it could happen to anyone.”

The Tongan government requested emergency help to bring supplies to Tonga, and help with the damages.

However Tonga has had very little exposure to COVID-19, so people worried that sending aid workers from outside could introduce the virus to the community. Australia found a way to send supplies contactless by making sure no-one got off the ship and moving supplies from ship to island by crane.

Even though East Palo Alto is so far away, the community has been working to help support Polynesian families, especially those directly affected by the incident.

Stanford health care center has donated about 140,000 N95 and KN95 masks, enough to give at least one to every person on the island.

Some families, though, still haven’t reached their relatives.

IF YOU ARE INTERESTED IN DONATING:  go to https://www.gofundme.com/f/tsunami-relief-tonga-islands