The Junior Varsity and Varsity girls volleyball teams played in-person home games on Sept. 22 to a modest-sized crowd of fans for the first time since the 2019 season, bringing wins overall to the Panther scorecard.

About 20 Eastside friends and family came to cheer the Panthers against rival Mountain View Academy. The JV team won two out of three sets while the varsity team won three out of the four sets played.

The JV team played first. Hesitant and nervous at the start, the teammates gained confidence as they played, according to sophomores Lorena Jeromino, Cynthia Ponce and Brianna Velasquez.

“We were quiet for the first round,” said Lorena. “But in the second set we were really hyped up,” Cynthia jumped in, and Brianna added, “and our energy increased.”

Junior Yesenia Machorro watched the JV game while waiting to play on the varsity team.

“JV took it home which was really good,” she said. “It was really amazing because it was a home game.”

The Varsity team had a larger crowd cheering them on, including fans and the JV team players. Normally, the competition includes three sets, but the varsity team schedule called for four sets. The games were intense, said junior Yesenia Machorro, especially during the neck-and-neck final set.

“At one point they were at 22 and we were at 20, and I thought in my head, ‘I really don’t want to lose this game,’” she said, “but when we got into the circle, we said we were going to take this home.”

– Sarai Wagner contributed to this report 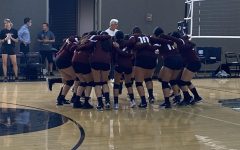 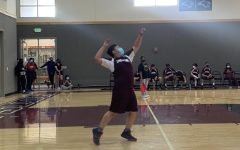 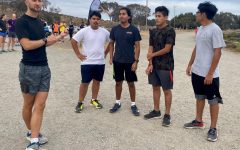