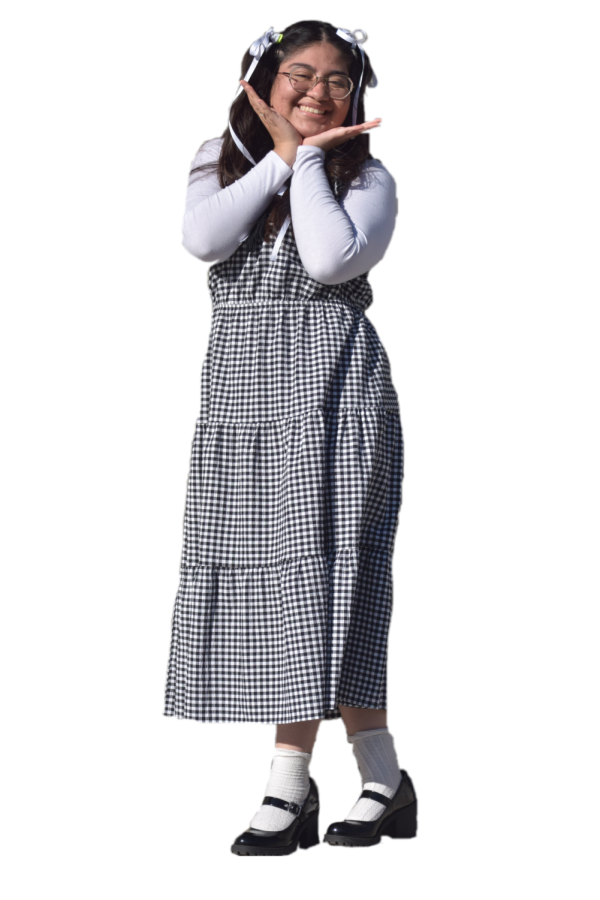 Senior Indira Villeda wears her “strawberry picking” dress for her birthday on Feb. 15.

Students at Eastside have a variety of personalities and backgrounds, and many like to express themselves through style and fashion. Different factors influence people’s way of dressing, including sexuality, culture, family members, gender and more.

“My mom dresses very professionally and I take that up from her,” Alexis said. “She also has another way of dressing which is more relaxed but still has that baddie vibe.”

Alexis wants his clothes to show people that he is a composed person. For example, when he wears ironed jeans and patterned button up shirts and blue-light glasses, it gives a business casual look.

“As someone who struggled with finding my identity for a long time, I use my clothes as a way to put myself together,” he said.

Some people connect deeply to fashion, expressing their identity and individuality. It takes a lot of confidence to be unfazed by what people may say about you.

For many students, though, making a statement through fashion is too scary – it could draw criticism. They focus on being comfortable.

Junior Isabel Bustos has different views on fashion and what it represents. She wears jeans or sweats with an occasional crop top and oversized hoodie.

“I don’t really have an inspiration for how I dress, I just go with something I feel comfortable in,” Isabel said. “I don’t feel comfortable with some things people choose to wear, or I just don’t think it’ll look good on me.”

Isabel said her style conveys a message of feeling comfortable and not caring about what others think. She puts on what makes her feel safe and not judged.

“Sometimes I wear some outfits because they make me feel comfortable, other times the outfits I want to wear I don’t, because I feel as if I’m being judged for showing skin,” she said.

Senior Indira Villeda believes fashion is a part of her expression and has had a big impact on her life so far. She enjoys combining colors and choosing accessories carefully, and wearing things that aren’t typical on campus, such as coats, scarves, corsets and more.

“Some of the people who inspire my style are 60’s Hollywood stars like Audrey Hepburn and Marilyn Monroe,” she said. “I also look at people who are famous right now and I take inspiration from them.”

Paying attention to people who are iconic, timeless pieces are what she most desires. When she gets ready for her day, she doesn’t want people to think that she dresses for attention or compliments.

Indira calls fashion a form of therapy for when words fail her.

“My fashion sense developed as a form of therapy because there was a time in my life where I didn’t know how to express myself in the way that I wanted to,” she said, “and I realized that even though now I want to be an English major, words weren’t working for me.”

Clothes enable her to express a different side of herself. She focuses on her aesthetics and vibe and tries to distance the identity aspects from her clothes. Whatever feels good that day, she wears.

A healthy environment for fashion fans is one that lets people express themselves and not be judged, and people said this is true at Eastside.